After waking up from a bad dream in early 1970 Warren Hinckle made a decision that would forever change the landscape of investigative journalism. At the time Hinckle was the editor of Scanlan’s Monthly and feeling as though the American magazine had become boring and predictable was something that he aimed to change.With this in mind Hinckle assigned Hunter S Thompson to go to the Kentucky Derby and to “forget about the horse race and focus on the crowds and what type of horrible slobs they actually are.” To assist in this mission Hinckle had flown in little known British illustrator Ralph Steadman for his first trip to America and for his first assignment with Hunter. Unbeknownst to any of these men at the time, the weekend ahead and the resulting article would be the springboard that saw the birth of Gonzo journalism and the beginning of a very long and prolific collaborative partnership between Hunter S Thompson and Ralph Steadman.

When discussing and analyzing the birth of Gonzo it is important to consider several factors that certainly must have contributed to the formation of this newfound journalistic approach. First and foremost, Richard Nixon had just taken office two years earlier and the year before, 1969, saw Nixon make history by becoming the first active president to attend the Kentucky Derby. Hunter’s disgust and hate for Nixon was well known and he made it a point to speak on this as often as possible. Also, the state of the nation was shaky as the Black Panthers were at the peak of their powers and there were protests across the country from the recently charged counter culture in response to the Vietnam War. This outrage would peak two days after the Derby with the Kent State Massacre that saw four students killed and nine others seriously injured while protesting the invasion into Cambodia by US forces. Another fact deserving of serious consideration is that Louisville, Kentucky, was the birthplace of Hunter Thompson so he was returning to his native land to report on the very people who had largely already outed him as a troubled youth due to all the mischief he had caused during his adolescent years. Thus, the country was quite polarized and divided during these times and Hunter already had a chip on his shoulder for his homecoming to the Derby. Bring Ralph Steadman into the mix and all of the sudden you have the perfect storm of variables for Gonzo to manifest and with Hinckle’s orders of forgetting about the horserace, Hunter and Ralph did what they did best together…. Get hammered and become the story!!

Concluding, Gonzo was born when a Maverick editor hired a hometown hellian/vandal/hero to cut loose with a first time visitor to the USA for a weekend of drunken debauchery in Louisville, Kentucky. Scanlan’s Monthly may not have lasted too long but it will forever be remembered for providing the platform and perfect cast of characters to create a movement that will live forever. 50 years later GONZO is alive and well and has become far more than a journalistic style, it is a way of life and a religion of sorts to many, myself included. To celebrate and honor this epic moment in time, Ralph Steadman, Jud Bergeron, and I have collaborated once again to create a bronze sculpture of the iconic image most associated with the illustrations done for the original story. On a hot steamy afternoon on May 2, 1970, Dust Commander stormed to victory while Hunter and Ralph drank copious amounts of booze and searched for the perfect Kentucky faces to illustrate the story. Weeks later, and written under duress, Hunter turned in the story that would accompany the drawings Ralph had produced with lipstick and other borrowed utensils and the rest, as they say, is history. “The Kentucky Derby is Decadent and Depraved” was where it all began but Hunter and Ralph were now the dynamic duo that would travel the world together and make Gonzo a household term. It became impossible to read Hunter’s writing without seeing Ralph’s illustrations and their collaborative partnership was unlike anything the world had ever seen prior to that epic weekend at the Derby 50 years ago!! 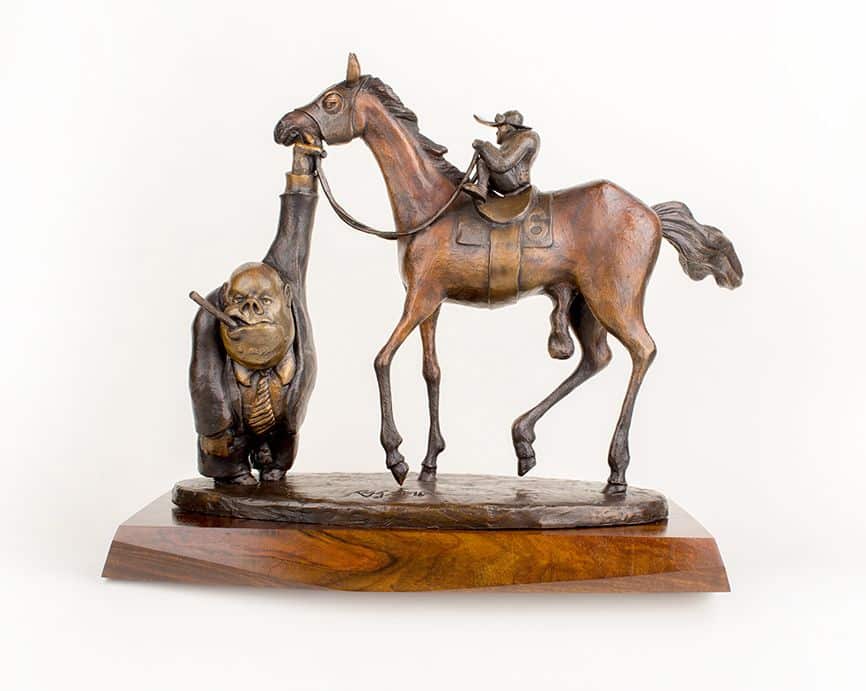 Based on Ralph’s timeless illustration from he and Hunter S Thompson’s first assignment together in 1970, this sculpture brings the birth of Gonzo into the bronze/3D world.

Stay connected with The Chambers Project for show announcements, artist news, and much more. We will never spam you.